The Lehigh Valley is a fast-growing region in eastern Pennsylvania that covers 726 square miles in Lehigh and Northampton counties. The two-county area consists of the cities of Allentown, Bethlehem and Easton, 27 boroughs and 32 townships. More than 685,000 people call the region home, but that number is growing steadily by roughly 4,000 people per year. Nestled between some of the nation’s largest metropolitan areas, the Lehigh Valley features a rich variety of landscapes, including the Blue Mountain to the north, the Delaware River to the east and the South Mountain. The majority of the populated areas are increasing in density. This runs parallel with an increase in diversity, not only of the type of people who live, work, and visit here, but in the growing opportunities – and challenges – that impact our quality of life.

We'll use a theoretical group of ten friends to paint a portrait of the Lehigh Valley and its residents.

Our sample group represents typical demographics, so it’s made up of five men and five women. Two of us are under 18 and two are over 65 years old. Six of us fall somewhere in the middle, however trends indicate we are aging as a  population.

Of our friends, seven are white, one is black and two are of another race. Two of our ten friends identify as Hispanic or Latin-American, a group that has grown significantly in the region in the past 25 years.

About half of us are urban dwellers, roughly three of us live in suburbs and two of us prefer a rural lifestyle.

Many of us have lived in the region long-term while some of us are part of an increasing number of migrants to the area. Nearly 36,000 people, or 5.5% of our population, moved into the region between 2011-2015 (U.S. Census).

Because we are within 90 miles of seven metropolitan regions in the eastern U.S., including Philadelphia and New York City, we have increased opportunities in areas such as tourism and employment. Two of us travel beyond the region for our jobs each day. Half of our ten friends represent those who are working. Many of them work in the healthcare profession, which is not only the region’s largest employer, but it’s growing fast. The unemployment rate in the Valley is 5% compared to 4.4% nationally (August 2017). Our median income, at roughly $58,500, is higher than the state and national median. Eight of us are high school graduates and three have a bachelor's degree. 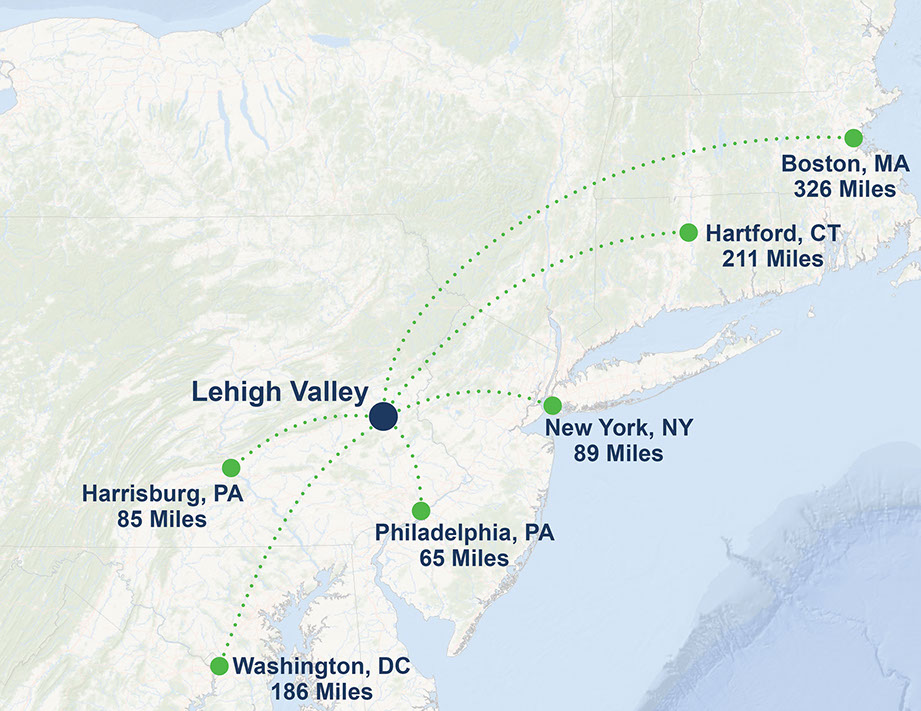 Seven of us live with our families, including five of us who are married. The average family size is three. Two of the three of us who live alone are women. Based on population projections, we will grow to nearly 13 people by 2040.

Equity in the Lehigh Valley

Equity means that all people have the same access to the resources, or opportunities, that are essential to their success. This is vital to supporting a sustainable region. Communities that prioritize equitable initiatives are found to be more successful and productive because there are more contributing hands and brains. Examining the disparities that exist in the Region is vital to informing public policy and furthering conversations with public, private and non-profit partners.

Equity implications are engrained in everything from land use patterns to environmental justice concerns, employment opportunities to transportation access, and housing options to community design. This is why equity is an integral part of the LVPC mission, and why themes of equity are woven throughout FutureLV: The Regional Plan.

The LVPC assessment of disparities throughout the Region purposefully uses the equity lens over equality because there is a distinct difference between them. With equality, everyone is given the same tools for success. However, distributing the same tools to all people does not yield the same results. For these reasons the LVPC analysis focuses on equity, where people are given the tools necessary to overcome barriers to success based on individual needs. This may result in an unequal distribution of resources, which makes equity a more flexible measure than equality, because it is allows for equivalency, while not demanding sameness. 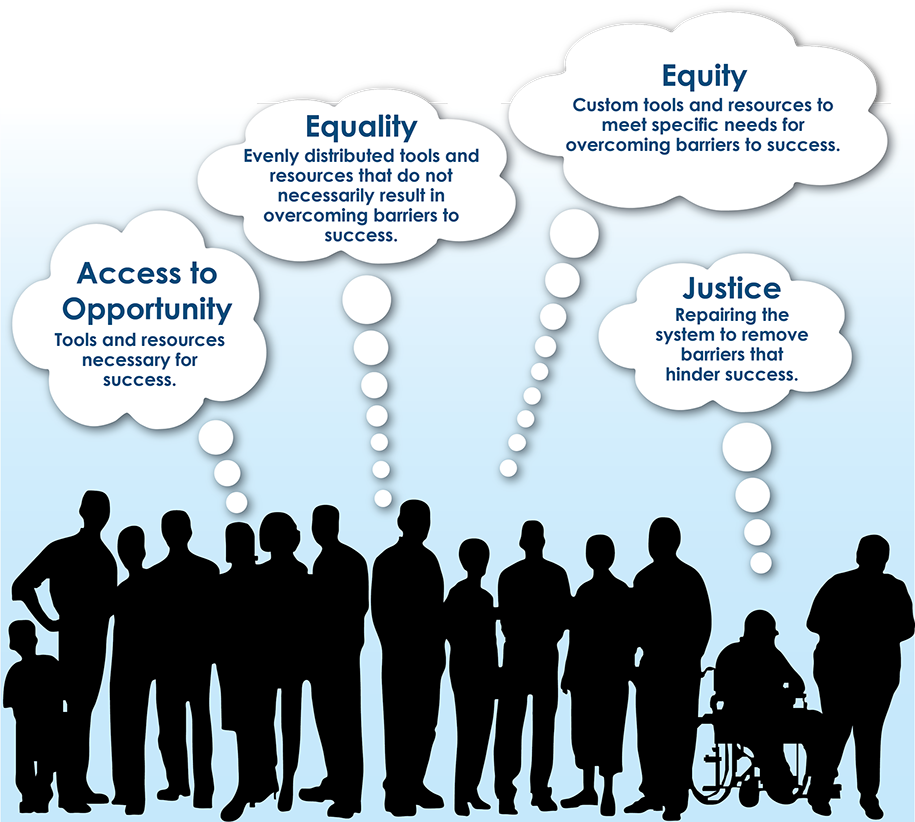 The data used for analysis is primarily from the U.S. Census Bureau American Community Survey, which is updated annually. The U.S. Census Bureau’s definitions for race and ethnicity have changed over the decades in order to reflect changes in society. Today, the U.S. Census Bureau considers race and ethnicity as two separate concepts. ‘Race’ refers to social groups whose common base is physical characteristics and geography of origin, such as Europe and Africa. ‘Ethnicity’ typically refers to social groups that have a basis in culture and language, though the Census Bureau uses ethnicity exclusively to differentiate those who are Hispanic or Latino. Therefore, a Hispanic or Latino Census respondent can also identify in a variety of racial groups, such as White, Black or Asian. Both the race and ethnicity categories on the Census are self-identified, and individual responses may be based on the race and ethnicity a person identifies with or what they believe others perceive them to be. Either way, the subject of race and ethnicity is highly qualitative, which is why the ‘some other race’ category is one of the fastest-growing racial categories nationally, as individuals are increasingly finding they don’t fit squarely into the Census-defined categories.

Significant percentages of almost all racial groups in the Lehigh Valley identify as also being Hispanic or Latino, including 95% of those that indicated they were ‘some other race’. 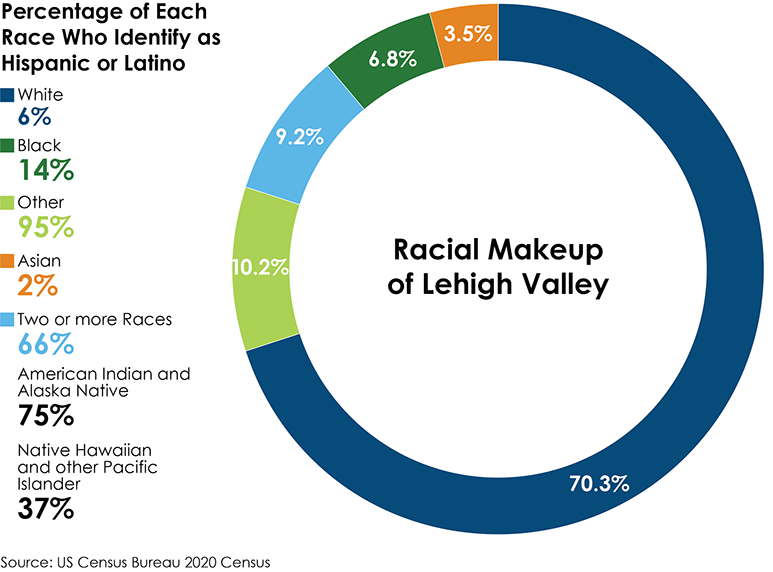 The Lehigh Valley has been diversifying at an increasing rate for decades. 70% of the population today is White, which has decreased from 99% in 1970. The population of Non-Whites is five times more than in 1990, and the proportion of Hispanic or Latino residents has grown exponentially over the last 50 years. Today, 21% of the region’s population identifies as Hispanic or Latino.

Inequities Between Race and Ethnicity

The LVPC Equity Analysis evaluates 14 data points on housing, education, transportation and employment to determine the level of access to opportunity for the Region and each Census tract. For the analysis, each area and the residents who live there are identified as having very low, low, moderate, high, or very high access to opportunity. As data continues to be analyzed, the most recent findings will be incorporated into the equity map, and the analysis will continue to be updated.

The Census includes five categories for race, some with subcategories, and also allows for respondents to designate if they identify as more than one race. The LVPC Equity Analysis incorporates all these race categories, while providing a higher-level evaluation of disparities between White and Non-White races to demonstrate inequities between them. The category of Non-White refers to all respondents who did not indicate that they identify as White alone, aside from those who also indicated that they are of Hispanic or Latino origin. 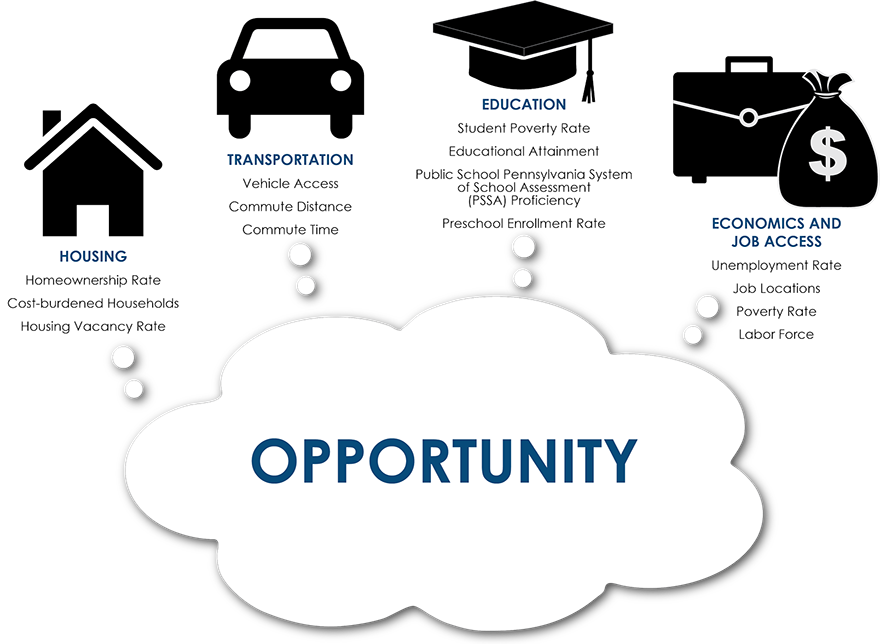 Regionwide, there is a noticeable disparity in access to opportunity between different racial and ethnic groups. White individuals are twice as likely to live in an area with very high opportunity compared to Non-Whites. While Hispanics or Latinos make up nearly one in five Valley residents, just under 38% of the demographic group has high or very high access to opportunity compared to 79% of Non-Hispanics or Latinos. This disparity stems from barriers to a variety of factors (or opportunities) for Non-White individuals.

Access to educational opportunities is one of the most important equity factors evaluated, because barriers to education result in further inequities. More than one in five Non-Whites and more than a quarter of Hispanics or Latinos do not have a high school diploma, compared to White residents, who are three times more likely to graduate from high school. This severely limits employment opportunity as well as countless other opportunities critical to success.

Language barriers often create impediments to educational attainment. Individuals that do not speak English at home are over three times more likely not to graduate from high school compared to those that do. Disparities between other levels of educational attainment are significantly less, however, indicating that language barriers are critically tied to success in early education.

Limited opportunities for income, based on educational and employment constraints, ultimately limit a person’s ability to buy a home, which is one of the most common ways to build wealth. In this region, Whites are almost twice as likely to own a home than Non-Whites and more than twice as likely to own a home than Hispanics or Latinos alone. Lack of homeownership can also further reduce educational opportunities for future generations, as many families use home equity as a mechanism to finance higher education.

Systematic barriers to homeownership for Non-Whites have historically hindered wealth building, contributing to the wealth gap seen between Whites and Non-Whites at a national level. Twentieth century housing practices, such as redlining, specifically prevented Blacks from insured mortgages and reduced homeownership. The LVPC is continuing to assess housing issues throughout the Region in a comparison between the housing market and income levels, to determine gaps and opportunities to improve housing attainability for all residents.

Equity plays a critical role in the regional economy. Increased equity has been found to reduce poverty and boost economic growth, by increasing incomes and thus increasing one’s ability to participate in and contribute to the local economy. Increasing the diversity and inclusivity of the Valley’s workforce also enables businesses to leverage the talent pools of different populations.

Nearly a quarter of Hispanics or Latinos in the Lehigh Valley have a combined household income that is less than $20,000 a year. This figure is only marginally higher than a single worker’s minimum wage income and is less than the $24,835 livable wage for a single, childless adult in the Valley. This is especially notable in comparison to White households, nearly one-third of which earn $100,000 or more annually. These disparities for income and poverty between Whites, Non-Whites and Hispanics or Latinos highlight present conditions, where strides taken by society to overcome racism cannot alone combat centuries of discriminatory practices that still pose barriers to opportunity for those groups today.

Internet access is an increasingly important factor in assessing equitable access to opportunities in the Region, as modern and reliable internet connectivity plays a critical role in infrastructure for the movement of people and goods, such as with autonomous vehicles. Additionally, as people continue using internet platforms for communication and to conduct business, those without connectivity will find it increasingly difficult to access jobs and educational resources.

Although it’s undeniable that existing racial disparities in the Region make up a significant portion of the equity work to be done, it is important to note that race is not always the equity issue, as in the case of internet access. The percentage of population without internet access is fairly evenly distributed among Whites, Non-Whites and Hispanics or Latinos. Internet access is more so an income-based inequity issue. There are also lifestyle factors to consider, as senior citizens may be more likely to choose not to have internet, and in rural areas of the Region internet access is not entirely available. The LVPC is continuing to examine disparities in internet access, as connectivity plays a critical role in Valley residents’ ability to access education, locate job opportunities or remote work, and compete in the global market.

The interactive Opportunity Map shows each of the Lehigh Valley’s Census tracts, on a scale ranging from the lowest to highest access to opportunity. Click on an area of the map to view that tract’s opportunity data and level of access to housing, transportation, employment and education.

How to use the Interactive Map

The next sections will sketch a statistical picture of the Lehigh Valley, ranging from the kind of homes we live in to the health challenges we face to the environmental benefits all around us, and more.