Much like weather and air quality, transportation impacts virtually everyone. You don’t have to own a car to be frustrated by congestion or exhilarated by the beauty of a scenic trail. And in the Lehigh Valley, you can get your fill of both, whether it be on the 90,000 vehicle-per-day Route 22 or a D&L Trail that snakes through 21 municipalities in Lehigh and Northampton counties.

Traffic congestion in the Lehigh Valley is defined as high-density traffic flow in which speed and freedom to maneuver are severely restricted, and comfort and convenience have declined, even though flow remains stable.

More than 100,000 residents commute outside the Lehigh Valley for work each day, contributing to an average daily commute time of 26 minutes region-wide. Northampton County residents, on average, have a slightly longer commute time than their neighbors in Lehigh County, largely because a higher percentage of them are traveling eastward along high-volume roads, such as Route 22 and Interstate 78, to the more metropolitan areas of New Jersey and New York City.

Lehigh Valley drivers have collectively added more than 650,000 miles to their travel through the region since 2013, increasing traffic on some roads, while prompting new construction to increase capacity on others. 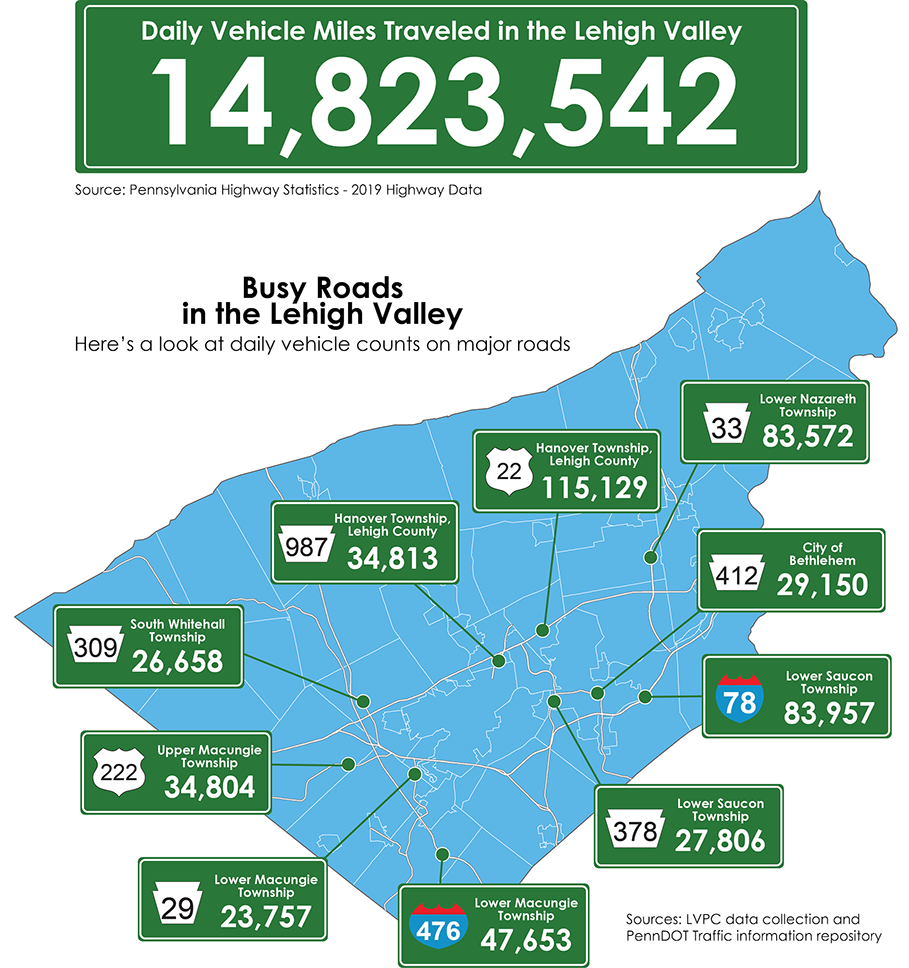 The interactive map below gives a full picture of why it’s an interconnected transportation network. Alter one part and it’s going to affect another. That’s why the 6,100 vehicles that traveled along Tatamy’s Main Street in 2013 jumped to nearly 22,000 after the Charles Chrin Interchange was built in 2015, and why traffic along Tilghman Street in Allentown nearly doubled after the PPL Center opened and activity downtown grew. And why road construction on one major road typically pushes traffic to others. Here’s a look at the region’s busiest—not necessarily the most congested—roadways and how traffic on some of them has changed over the past decade. Click any point to see the average daily vehicles from multiple years.

Commuting in the Lehigh Valley

The Lehigh Valley is sometimes called a bedroom community for the New York and Philadelphia regions, and there’s a grain of truth to that. More than 7,300 Valley residents work in Philadelphia and another 2,000 work in Manhattan. But in reality, their central location in the Northeast make Lehigh and Northampton counties part of a diverse commuting corridor that allows residents a wide radius for which to travel to work, while people from outside the region sometimes travel long distances to work here. Consider that in addition to those more than 9,000 people traveling to New York and Philadelphia, 58 Lehigh Valley residents work in Tioga County, and more than 1,100 Pittsburgh area residents come here to work. That’s diversity. And while Lehigh Valley drivers may find the wait on some of the region’s roads frustrating, their average daily commute of 26 minutes is less than the 33 minutes Philadelphians spend on the road and the 40 minutes it takes the typical New Yorker to get to work. 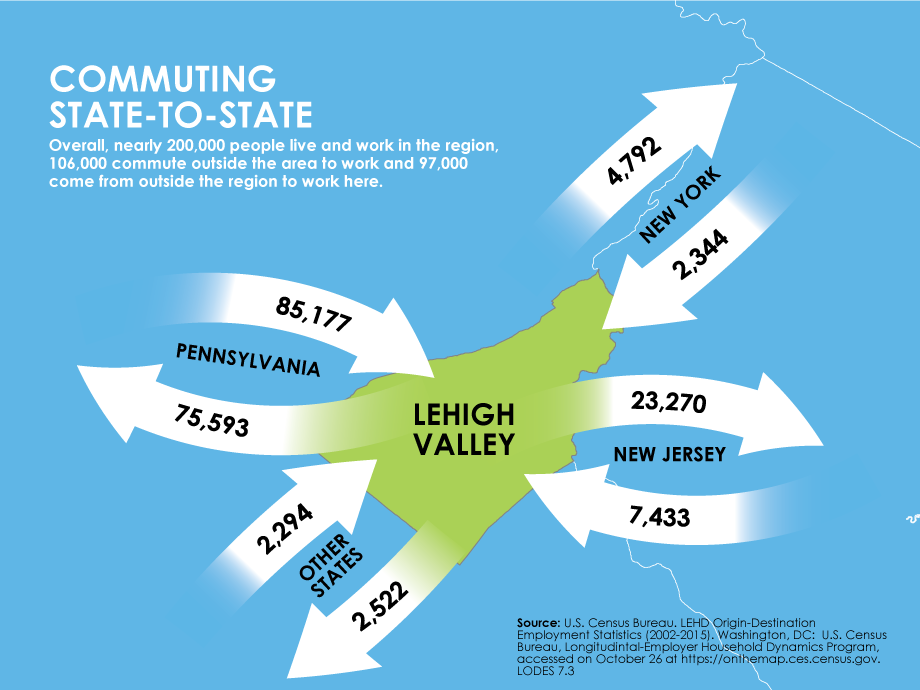 The following three interactive maps give a detailed picture where Valley residents are going to work, and where others are coming from to work here.

The Lehigh Valley has a robust and growing trail network comprised of larger paths such as the D&L Trail, to smaller community trails, such as the Ironton Rail Trail or Karl Stirner Arts Trail. With more than 460 miles of land and water trails in place, community leaders expect to bolster that by building new trails and closing gaps in the existing system to provide a more seamless network for recreation and commuting.

Maintaining the region’s bridges is essential for mobility. Closed and weight-restricted bridges result in detours and increased travel times.

The plan to build and maintain the region’s roads and bridges, and operate its mass transit system, is known as the Transportation Improvement Program. In 2017, a total investment of $28 million for highway projects, $46 million for bridge projects and $34 million for transit projects was programmed as part of a four-year, $458 million program that runs through 2020. These investments help to maintain the current infrastructure, while building new projects to meet the demands of increasing traffic volumes. The Lehigh Valley Transportation Study, supported by the Lehigh Valley Planning Commission, is the transportation investment planning arm for the region.

The Lehigh Valley’s location within a single-day’s truck delivery to more than one-third of all U.S. consumers has made it an attractive location for distribution centers that bring freight into the Valley. Expected growth in freight traffic will force planners to invest in the road network, while working to minimize the impacts to the overall quality of life in the region. 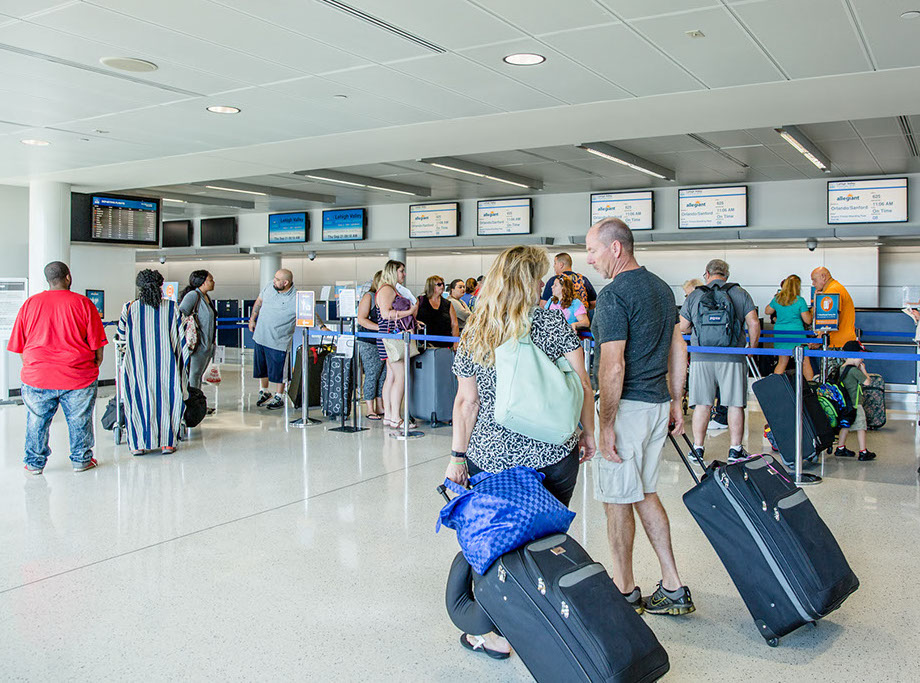 The Lehigh Valley International Airport is one of three airports in the region, but the only one providing both passenger air service and air freight service. LVIA served nearly 800,000 passengers in 2018 and has become a major air freight hub for Amazon.com and Federal Express.

Two other airports, Braden Airpark and Queen City Airport, specialize in general aviation, serving as base to more than 130 small planes.