The Lehigh Valley has

Agricultural land for crops, pastures, orchards, tree farms and vineyards covers roughly 22% of the Lehigh Valley’s 726 square miles. According to the Lehigh Valley Local Food Economy Report (2013), the greatest challenge facing the local food economy is the loss of farmland, but farmers and municipalities have worked hard to prevent that. While Pennsylvania leads the nation with more than 530,000 acres of preserved farmland as of July 1, 2020, the Lehigh Valley has done its part, with 554 farms preserved, totaling almost 42,000 acres. Lehigh and Northampton counties have partnership programs that allow municipal funding to be added to county funding, making them eligible to receive more funding from Pennsylvania’s Farmland Preservation Program.

Farms today are also struggling with the current consumer food market. Lehigh Valley residents typically spend 9.7% of their income on food, a drop from 23.4% in 1929. Roughly 50% of their money is spent on eating out, and one-third of the average grocery bill is spent on non-farmed or non-local products, such as sweets, frozen prepared meals, snacks, condiments and non-dairy fats.

Agriculture produced within the Lehigh Valley is approximately 65% plant-based and 35% animal-based. More than 60% of Lehigh Valley farms are smaller than 50 acres. The region’s largest farms are typically used to grow corn, but not the kind you’ll eat at your next barbecue. As of 2012, 26% of farms were being used to grow corn primarily for grain; these farms accounted for 30% of all Lehigh Valley farmland. While sweet corn may be in short supply, Lehigh County is the place to go for that Thanksgiving turkey. In 2012, the U.S. Department of Agriculture’s Census of Agriculture ranked Lehigh County as Pennsylvania’s leader in turkey inventory. 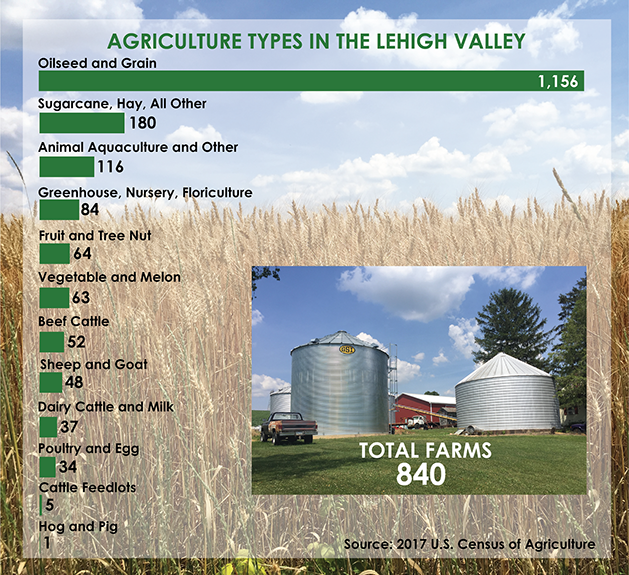 Many growers choose to sell their products directly to consumers at farmer’s markets throughout the Lehigh Valley. There are several wholesale buyers of locally grown foods in the region, such as restaurants, schools, hospitals and corporations. However, there is a lack of infrastructure, such as food hubs and freezing or packing facilities, to process and distribute the local foods.

Urban farms have the potential to address issues of food insecurity and educate communities about how food is grown. As of 2013, there were 36 known community gardens in the Lehigh Valley. On a larger scale, converting vacant buildings into indoor urban farms is becoming increasingly common.